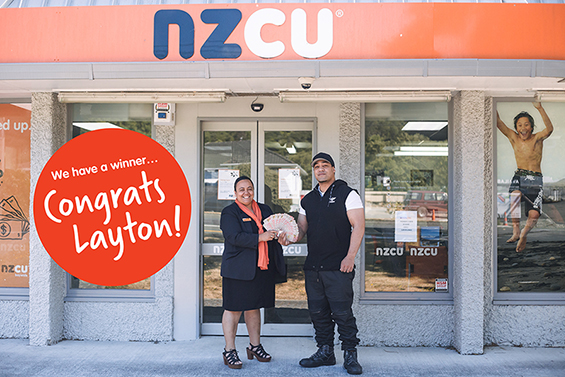 A Wainuiomata man, Layton Sio, has won $5,000 from NZCU Baywide as part of a recent nationwide personal loan promotion.

Mr Sio took out a personal loan to pay for a trip home to his Marae near Whakatane to attend his grandmother’s unveiling and entered the NZCU Baywide draw.

“I was actually quite shocked when I heard I’d won – I wondered whether the call was a joke,” Mr Sio said. “I think I will spend a little of the $5,000 on buying some presents for my nieces and nephews, but I won’t spend it all on Christmas!”

Mr Sio is a night-time security guard at Queensgate Shopping Mall in Lower Hutt and said his win will “help out a lot.”

He took out his personal loan a week before travelling to Te Totara Marae to be with his whānau:

“We realised quite late we needed some extra money to travel and to pay for food when we were there, so it was a last minute rush to get a loan,” he said.

“Family, including cousins we hadn’t seen for a long time, were coming over from Australia so we had to be there. The unveiling lasted about two days but we stayed for a week to be with family.”

NZCU Baywide GM Sales, Marketing and Channels, Andrew Quayle, said it’s the second year in a row for the draw and it’s great to be able to help people out so close to Christmas.

“This time of year is always more expensive for families as they prepare for Christmas and summer so it’s great to be able to provide some extra help to a valued customer.

“We are rapt that Mr Sio has won – he needed some extra money so he could attend a very important whānau event, so it’s great he also now has a chance to enjoy some extra money over Christmas.”

“This year we had a significant number of entries into our personal loan prize draw, well up on last year. This highlights the importance of having good lending alternatives available to everyday Kiwi’s at this time of year.

The promotion was open to any NZCU Baywide customer who took out a personal loan over $2,000 between 1 September and 8 December. The winner was drawn randomly from all those who had loans approved and drawn down across the 16 strong branch network as well as nationwide online applications.

Even without winning the draw NZCU Baywide customers are already taking advantage of some of the best value secured and unsecured personal and car loans in the country, after the Credit Union was rated an “outstanding value” lender by Canstar earlier in December.

NZCU Baywide is a 100 percent New Zealand owned credit union with a 16 branch network throughout the central and lower North Island and a nationwide online lending website servicing the needs of everyday Kiwi’s. It was originally established in Hawke’s Bay in 1971 as the Whakatu Freezing Works Employee’s Credit Union.