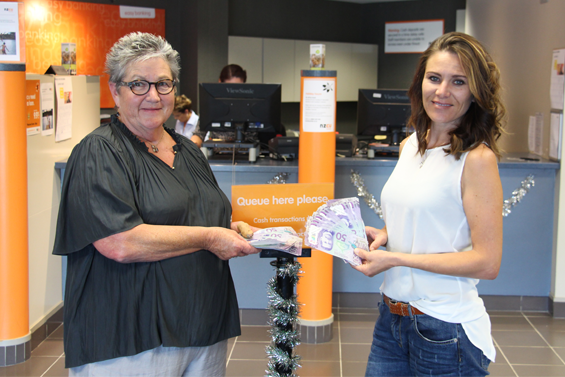 Ms Warner got a huge surprise this week when she won $5,000 from NZCU Baywide as part of a nation-wide personal loan promotion. The cash windfall was the silver lining to what has been a difficult six weeks, after Ms Warner wrote off her car on her birthday in early November. Fortunately, she was insured but it wasn’t enough to cover the cost of a replacement car.

“I’ve been a customer for over 10 years and when all of this happened NZCU Baywide’s Glenys Hannan suggested I look online for a new car.

“She then helped me through the loan process and I had no idea that by getting a personal loan I was in the draw for $5,000.

“It wasn’t until yesterday that while I was at the NZCU Baywide Napier branch sorting out a new cash card that I got a phone call to say I had won. Little did they know that I was actually in the branch! My son was with me and when I started to cry he thought something bad had happened, however it was quite the opposite, they were tears of joy.”

Kathleen is now looking to spend a little extra on Christmas gifts for family as well as putting money aside for a planned overseas holiday. Ms Hannan was “rapt” that Kathleen was the personal loan winner as she’s known her for many years.

“It couldn’t have gone to anyone more deserving. Kathleen was so upset when she wrote her car off on her birthday and we’ve been able to support her; from arranging the insurance claim to processing her application for a vehicle loan so she could purchase a new car.

The promotion was open to any NZCU Baywide customers that took out a personal loan over $2,000 between November 1 and December 16 2016. The winner was drawn randomly from all those that had loans approved and drawn down across the 16 strong branch network as well as online applications.

“The promotion has been a huge success and I’m sure many of our customers and others throughout New Zealand will be very keen to win,” she said.