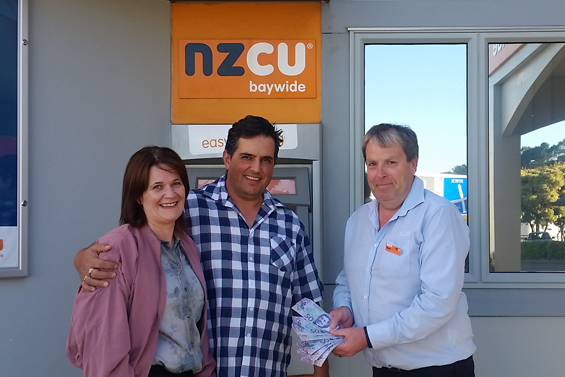 Paying household bills will not be a burden this winter for the Van der Walt family of Hastings after winning $5,000 from NZCU Baywide in its “Chill... we’ll get the bills” promotion.

Zelda Van der Walt and her husband Stephen entered the promotion when taking out a debt consolidation loan with NZCU Baywide.  They moved their lending over from another provider, where they had been paying a higher interest rate, to save money on interest and increase their monthly cash surplus, putting them in a better position to reach their future goal of owning a home.

“We visited the branch in Napier to get a better rate so we could save money, and now we’ve won this amazing prize - we are so very grateful - I cried when I found out,” Zelda says.

”Honestly this could not have come at a better time as it’s been an expensive year so far,” Zelda says. “We’ve had two wonderful weddings for close friends and our daughter is just about the turn 21 so we’re having a party. We also usually have to save up for winter to cover the extra cost of power, so this prize is absolutely going to help out.”

NZCU Baywide GM Sales, Marketing and Channels, Andrew Quayle, says the promotion is special because it removes the pain of paying bills for a while, provides an ongoing benefit and allows a bit of financial freedom over the winter months.

“This time of year is always more expensive for families as they prepare for winter. We are rapt to be able to provide some extra help so they have some leftover cash to spend on other things,” he says.

When asking Zelda and Stephen what they would buy, there’s one answer:

“We want to save so we can become New Zealand citizens,” she says.

“We moved from South Africa ten years ago, settled in Hawke’s Bay then moved to Gisborne for my husband’s job but then he was made redundant, so moved back.  Over these years, every time we’ve tried to become citizens there’s been a challenge and it’s been postponed. But now we have the chance to become proper Kiwis,” she says.

“We run regular promotions but it’s the first time we’ve had this type of prize that provides this level of support at an expensive time of year,” adds Andrew Quayle.  “We’ll definitely consider running something similar again in the future.”

The promotion was open to any NZCU Baywide customer who took out a personal loan over $2,000 between 1 February and 30 April 2018. The winner was drawn randomly from all those who had loans approved and drawn down across the 16 strong branch network, as well as online applications received nationwide.

NZCU Baywide is New Zealand’s largest credit union (by asset size) and offers all its customers some of the best value secured and unsecured personal and car loans in the country. For two years running it has been rated an “outstanding value” lender by Canstar, New Zealand and Australia’s only fully interactive research service in retail and business finance.

NZCU Baywide is a 100 percent New Zealand owned credit union with a 16 branch network throughout the central and lower North Island and a nationwide online lending website servicing the needs of everyday Kiwis. It was originally established in Hawke’s Bay in 1971 as the Whakatu Freezing Works Employee’s Credit Union.